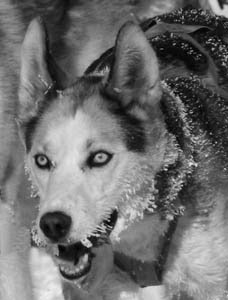 
The Siberian Husky of today is not the same dog as was originally recognized. Environment, selective breeding, and changes in lifestyle have significantly changed the village rugged-ness of the breed. Only a small number of people were committed to maintain the original use of the Seppala Siberian by maintaining performance abilities, sweet temperments, and ongoing endurance. To know a Seppala is to love a Seppala.
Posted by Togo at 5:08 PM